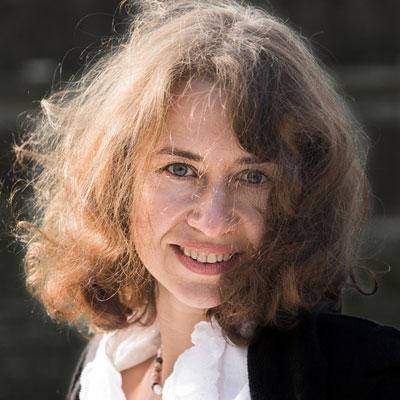 Dr. Anna Zassimova was born in Moscow, the daughter of a physicist and pianist. She studied piano with Vladimir Tropp at the Gnesins Russian Academy of Music and with Michael Uhde and Markus Stange at the University of Music Karlsruhe. Anna Zassimova also earned a Ph.D. degree in musicology and has studied art history.

She has given solo and chamber music performances at international festivals, including the Ruhr Piano Festival, Piano à St-Ursanne, Bloomsbury Festival in London, Heidelberg Spring Music Festival, Musica viva in Munich, and the Eclat Festival of new Music in Stuttgart. In September 2018, at Elbe Philharmonic Hall in Hamburg, she presented a program from her latest CD, Sonata Reminiscenza, on the Hänssler Classic label. In 2019, Sonata Reminiscenza was nominated for Germany’s Opus Klassik prize for classical music.

As orchestral soloist, Anna Zassimova has performed with the Stuttgart Chamber Orchestra, Württemberg Chamber Orchestra in London‘s Cadogan Hall among other venues, the Mannheim National Theatre, and Heilbronn Symphony Orchestra. Concert tours have taken her across Russia, the USA, and China.

A significant focus of her musical work is upon chamber music. Anna Zassimova performed with Poland‘s Silesian String Quartet, France’s Stanislas Quartet, and Germany’s Minguet Quartett. For several years she was a member of Phorminx modern music ensemble, playing many world premieres. For the cpo label she has recorded chamber music of Georges Catoire as well as the complete chamber compositions with piano of Sergei Taneyev.

Anna Zassimova has recorded nine CDs, including several first recordings. The focus of her internationally praised discography is piano and chamber music of Russia's fin de siècle as well as works by Chopin. Her concert recordings, interviews, and CDs have been broadcast in Germany on the DLF, NDR, SWR, BR, and WDR stations as well as by international broadcasters.

Bavarian Radio stated about Anna Zassimova’s pianism: "Her playing combines brilliant technique and inspired musicality, pianistic qualities that may be associated with those of the influential Russian piano school of Heinrich Neuhaus and his leading students Sviatoslav Richter and Emil Gilel."

Since 2007, Anna Zassimova has been a lecturer at the University of Music Karlsruhe. She also gives masterclasses in Germany and internationally. Several times she has been a juror at the Youth Makes Music (Jugend Musiziert) competition. As musician and art historian, she has been involved for several years in the collaboration between the Karlsruhe University of Music and the State Art Gallery of Karlsruhe, and also works on interdisciplinary projects combining music and the fine arts. Starting in 2016-2017, she has been artistic director of the German-Russian Cultural Society’s Musical Salons in Baden-Baden. Currently she is artistic director of the PIANOissimo concert series in Switzerland.