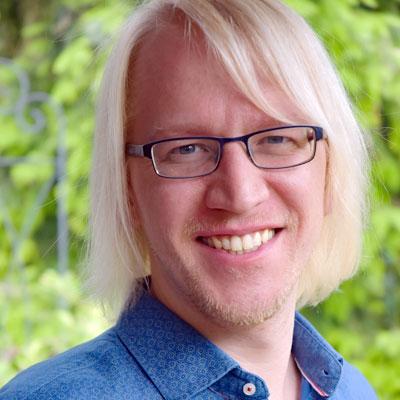 Dr. David Pace, born in 1987, studied Applied Informatics at the Baden-Wuerttemberg Cooperative State University Karlsruhe and, due to his versatile musical background, decided to study for a master’s degree in music informatics at the University of Music Karlsruhe. He furthered his studies with a PhD in the areas of symbolic music representation and algorithmic composition. One result of his dissertation was the Music Processing Suite application, which can be used for many musicological and music-informatics purposes. Among other things, the program enables new representations and visualizations of music, algorithmic composition with a specially developed compositional language as well as context-sensitive music searches and analyses.

During his undergraduate and doctoral studies, David Pace worked as a tutor, lecturer, and research assistant at the University of Music Karlsruhe. Since 2007, he is also employed as software developer at the German software company Seeburger AG in Bretten, Baden-Württemberg.

As a child, he was given piano lessons and later taught himself to play the guitar and drums in different formations and musical projects. He also sang in a number of choirs, including vocal resources, the choir of the Karlsruhe University of Applied Sciences. David Pace currently plays and sings in the rock band Acrimonic and the a cappella group Stimmgelage, which won second prize in the Jazz/ Pop/ Gospel A category at the International Choir Festival 2012 in Frankfurt. At the International Choir Festival 2018 in Stuttgart, it was awarded second prize in the Vocal Bands Level 2 category. He composes, arranges, and writes for ensembles and when listening to music, prefers vinyl records.