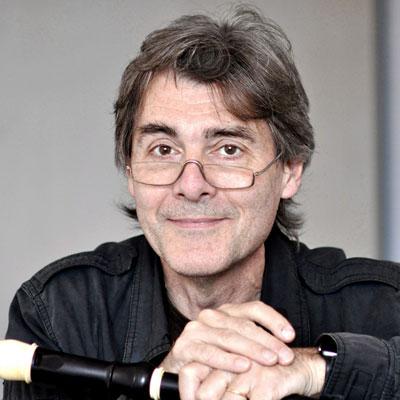 The recorder player and composer Karel van Steenhoven, born in 1958 in Voorburg, the Netherlands, studied at the Sweelinck Conservatory in Amsterdam with Kees Boeke. After his soloist exam in recorder technique in 1983, he studied composition with Robert Heppener and Tristan Keuris. Some of his compositions, including Stil Gevaar (Silent Danger) and La Chanteuse et le Bois sauvage have been recorded on CD by the Amsterdam Loeki Stardust Quartet; he is a founding member of the ensemble, with whom he tours the world, concertizing. Two of the quartet‘s CDs have won the Edison Prize.

Van Steenhoven has participated in concerts and recordings with Musica Antiqua Köln, the Academy of Ancient Music led by Christopher Hogwood, the Cologne Chamber Orchestra conducted by Helmut Müller-Brühl, and soloists of the Leipzig Gewandhaus Orchestra. Highlights included Palace Concerts with Frans Brüggen in 1987 for Queen Beatrix of the Netherlands.

As guest lecturer, he has taught at the the Urbino Early Music courses and conservatories of Berlin, Odense, Nuremberg, and Zurich. Karel van Steenhoven has served as juror at the Moeck International Solo Recorder Competition in London in 1997 and, with the composer Peter-Jan Wagemans, at the ARS Composition Contest in 2006.

Since 1995, he has been Professor of Recorder at the University of Music Karlsruhe and since 2013, visiting international professor at the Guildhall School of Music in London. He sees developing the contemporary recorder and related playing techniques as one of the most important tasks for today's recorder players.