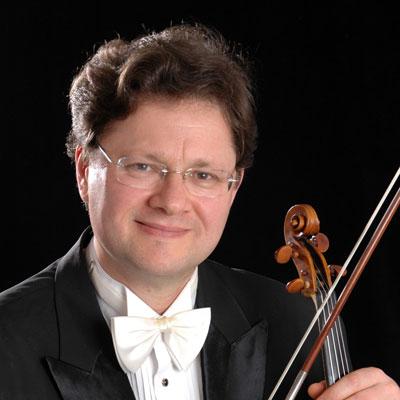 Nachum Erlich was born in Jerusalem in 1959. He began his violin studies with his father Moshe Erlich, member of the Jerusalem Symphony Orchestra, and continued with Yair Kless at the Rubin Conservatory in Jerusalem. Between 1975 and 1981, he was a master student of Max Rostal at the Bern Conservatory in Switzerland, where he finished his studies with the concert diploma with honors. In addition, he took part in master classes of Nathan Milstein and Henryk Szering. He continued further studies with Steven Staryk in Seattle. From 1981 to 1991, Nachum Erlich was a teacher at the Sibelius Academy of Music in Helsinki, Finland. Since 1991, he has held a professorship at the University of Music Karlsruhe, and in 2002 he was awarded artist in residence status by the University of Heidelberg.

As a soloist he has worked during his extensive international career with acclaimed conductors as Moshe Atzmon, Esa-Pekka Salonen, Rudolf Baumgartner, Okku Kamu, Jukka-Pekka Saraste, Walter Weller, and Sergiu Comissiona. Furthermore, he has taken particular pleasure in performing chamber music with colleagues such as Alfons Kontarsky, Siegfried Mauser, Kalle Randalu, Rudolf Meister, Julius Berger, Fany Solter, Martin Ostertag, Gustav Rivinius, Hartmut Rohde, Edward Vanderspar, Wolfgang Meyer, and Eduard Brunner. Nachum Erlich is a frequent and highly welcomed guest at many international festivals. His performances have been broadcast, telecast, and recorded on CDs. As a lecturer, he has supervised many masterclasses in Europe, the USA, South America, and Asia. His special interest lies in the discovery and interpretation of rare works through all epochs and especially the oeuvre of Max Reger. A CD with Nachum Erlich and the pianist Siegfried Mauser playing Reger's Sonatas op. 122 and op. 139 was released in January 2004 by Hänssler Verlag. Moreover, Nachum Erlich premiered "La Folia" by Reger in Karlsruhe and recorded the Bach Double Concerto with Ivry Gitlis.

Nachum Erlich began his pedagogical career directly after his studies, as a lecturer in violin at the Sibelius Academy in Helsinki. Since that time, many of his students have won leading orchestral and teaching positions, as well as prizes in national and international competitions. Since accepting a professorship at the University of Music Karlsruhe in 1991, he has been active in pedagogy worldwide. His students play in leading orchestras in Europe and overseas and hold professorships, including at Seoul University in Korea, National University of Art Seoul, and Hiroshima University in Japan.

Since his student days, intensive work with chamber orchestras has taken a large space in Nachum Erlich's artistic activity. During his years in Finland, he regularly took up the post of concertmaster in the Finnish Radio Symphony Orchestra and the Helsinki Philharmonic Orchestra. He has extensive experience as member and concertmaster of internationally renowned ensembles such as the Festival Strings Lucerne, the Camerata Bern and Basel Chamber Orchestra, and continues as teacher and artistic director for chamber and youth orchestras in Germany and abroad.

In 2001, Nachum Erlich assumed the direction of the chamber orchestra of the Unuiversity of Music Karlsruhe. He is a juror for national and international competitions, including the Paganini Moscow International Violin Competition. Since 2010, he performs on the ex-Szigeti Stradivarius of 1724, on loan from the L-Bank Baden Württemberg.

Since October 2022, Nachum Erlich has been prorector at the Karlsruhe University of Music for the area of artistic practice.