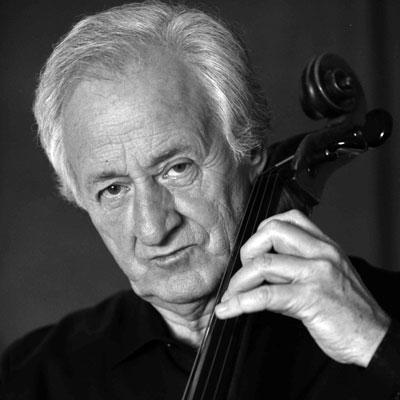 Peter Buck was born in Stuttgart. He received his first cello lessons from Alfred Saal, the cellist of the Wendling Quartet, and his son Gerhard Saal. He completed studies at the University of Music and Theatre Hamburg under Alfred Gemeinhardt and in the master class of Ludwig Hoelscher. Later, he furthered his studies with Pierre Fournier, to whom he owes significant artistic inspiration. In 1961, he was a prizewinner at the German University Competition in Munich. In the same year, he began orchestral work at the newly founded Württemberg Chamber Orchestra, where he was solo cellist until 1967.

In 1965, as founding member of the Melos Quartet, which quickly became famous by winning several international competitions, Peter Buck began an artistically rewarding career on concert podiums around the world. Many award-winning CD and film recordings document the extraordinary, almost forty year-long trajectory of the quartet. Many tributes, including honorary membership in the Beethoven House Association in Bonn and the Federal Cross of Merit recognize Peter Buck's achievements. Since 1980, Peter Buck has been a professor at the State University of Music and Performing Arts Stuttgart. As a devoted and highly achieving pedagogue, the social aspect of joint performance is part of the class. He formed the Rondo Violoncello cello ensemble from among students and graduates of his class, delighting audiences and critics alike with homogenous and spirited playing. He is constantly invited to serve as a juror at international competitions and present master classes. In October 2004, he was appointed visiting professor of the Shenyang Conservatory of Music, China.

In 1992, he was founding artistic director of the Oberstdorf Summer of Music. At the international classical festival in Allgäu, Bavaria, which he programmed until 2013, the focus was on promoting young talent. He set standards by combining master classes and different concert podiums for young musicians with a series of high-level concerts. His commitment to the classical festival bolstered by idealism, was rewarded in October 2004 with the cultural award f the Dr. Dazert Foundation.

In 2015, Peter Buck was invited to teach a chamber music master class at the University of Music Karlsruhe. Since then, as part of a teaching assignment, he has been conveying his profound knowledge to students, following his credo of the generational contract. He has been implementing this maxim for years as speaker of the Stuttgart Music Academy Alumni Association, with a concert series of his own. At the twice-yearly Alumniade, outstanding former students return to their alma mater for concerts.