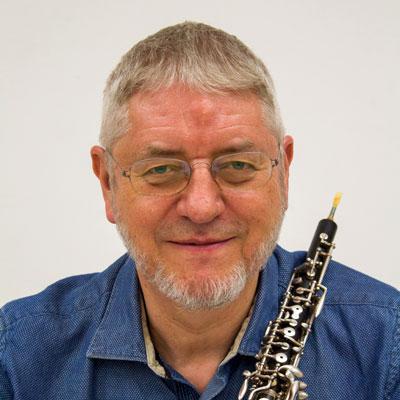 Born in 1951 in Bern to a Swiss musical family, Thomas Indermühle studied with Heinz Holliger at the Freiburg University of Music and Maurice Bourgue in Paris. This was followed by several years as solo oboist with the Netherlands Chamber Orchestra in Amsterdam and the Rotterdam Philharmonic. In 1974, he was a prizewinner at the Prague International Competition and in 1976, won the International ARD Competition in Munich. Since then, he plays as a soloist in almost all European countries, the USA, Canada, Mexico, Japan, Korea, and Australia. Leading composers such as Manfred Trojahn, Wolfgang Rihm, Akira Nishimura, and David Philip Hefti have written concertos for him.

Indermühle has also taken up conducting, regularly appearing with the Ensemble Couperin, the English Chamber Orchestra, and other ensembles.  his work as a conductor and working with his students. Teaching is another area of intense interest. For many years, Indermühle has supervised an oboe class at the Zurich University of the Arts (ZHdK). In 1989, the University of Music Karlsruhe appointed him as professor. He has recorded many CDs for the Philips, EMI, Claves, Novalis, and Camerata Tokyo labels.