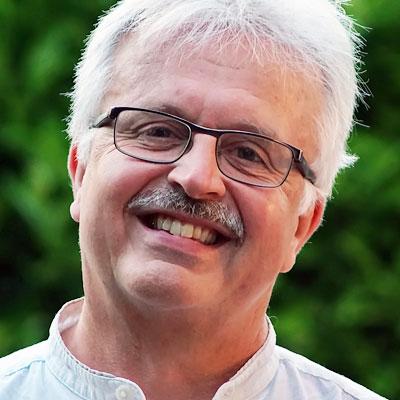 Sigmar Steddin, born in Ravensburg in 1960, studied conducting with Räto Tschupp, Martin Schmitt, and Erich Wächter and piano with Werner Genuit at the University of Music Karlsruhe. While still a student, he received a part-time contract as rehearsal coach at the Darmstadt State Theatre.

After graduation, he was hired in 1986 as rehearsal coach at the Zurich Opera House, in 1987 as accompanist and conductor at the Kaiserslautern Palatinate Theatre, and in 1989 at the Deutsche Oper am Rhein Düsseldorf/Duisburg. In 1991, he moved to the Kassel State Theater, first as head rehearsal pianist, then from 1999 as assistant conductor.

Since 2001, Sigmar Steddin has been Director of Studies and Professor of Accompaniment at the Institute for Music Theater at the University of Music Karlsruhe.

As rehearsal coach, he has worked with Alberto Zedda, Ingo Metzmacher, Fabio Luisi, Ádám Fischer, Witold Lutosławski, Ralf Weikert, János Kulka, and Hans Wallat. As conductor, he has led many operas, including Verdi's Macbeth, Nabucco, and Ballo in Maschera, Donizetti's Anna Bolena and Don Pasquale, Bellini's I Capuleti e i Montecchi, Weber's Freischütz, and Mozart's Magic Flute. Performances as a piano accompanist have taken him to Switzerland, Italy, Cyprus, and Turkey. He has also worked as a piano accompanist at master classes for Hilde Zadek, Brigitte Fassbaender, Julia Varady, Gwyneth Jones and Ileana Cotrubaș, among others.