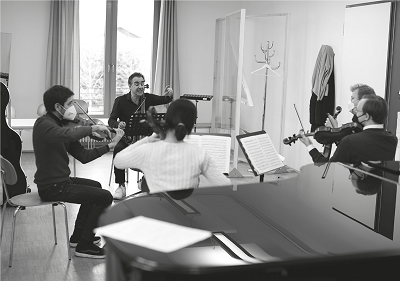 with awarding of the audience prize

The programme will be announced later.

The Vision String Quartet is considered "one of the most promising up-and-coming quartets, intensely combining craft and dedication." Der Tagesspiegel
Founded in 2012, the Vision String Quartet has established itself in the international string quartet scene in a very short time. With their unique ability to "walk" between the classical string quartet repertoire and their own compositions from genres such as folk, pop, rock, funk and minimal music, the four young musicians from Berlin are currently turning the classical concert world upside down. Cellist Leonard Disselhorst studied with Prof. Martin Ostertag at the Karlsruhe University of Music.