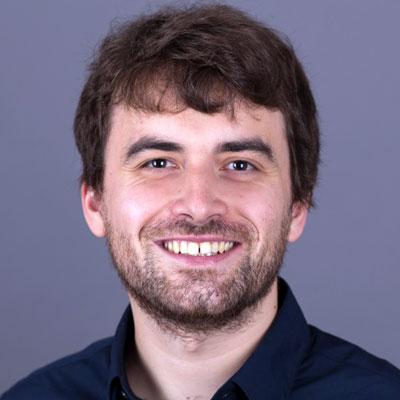 Patrick Borgeat, born in 1985 in Öhringen, southwest Germany, studied music informatics at the University of Music Karlsruhe and is a doctoral candidate and lecturer at the Institute for Music Informatics and Musicology with a focus on creative coding, immersive interactive 3D environments, live visuals, and live coding. For many years he has been involved in Karlsruhe as a live visuals performer and organizer of live coding events as well as appearances in the ZKM | Center for Art and Media Karlsruhe, the EFFEKTE Festival (2013/2015/2019) and silent film dubbing in the Schauburg cinema (2011/2012). Since 2010, he has been active throughout Europe with performances, exhibits, talks, and workshops, including in London, Madrid, Venice, Linz, Prague, Vienna, Liepāja, Tallinn, and St. Petersburg. Patrick Borgeat is a welcome guest at festivals and conferences such as LINKS Heidelberg Biennale for New Music (2010), SuperCollider Symposium (2010/2012), Laptops meet Musicians Festival (2011), Network Music Festival (2012/2013), BEAM Festival (2012), Festival Ars Electronica (2012), live.code.festival (2013), Festival RADICALdB (2014), GLOBALE (2016), GAMMA Festival (2016), International Conference on Live Coding (2016/2019), TEDxKIT (2017) , Sound Days Liepāja (2019) and the Open Codes exhibition (2018-2019) at the ZKM and in Mumbai.

With the live-coding ensemble Benoît and the Mandelbrots, Borgeat received an Honorary Mention at the Prix Ars Electronica (2012) in the Digital Music & Sound Art category; with the audiovisual band Ganzfeld he was awarded Honorable Mention at the Visual Music Live Competition (2015). In 2016, an album with improvisations by Benoît and the Mandelbrots on the Syff label was released as a double LP and digital download.

As a freelance artist and programmer, Patrick Borgeat realizes interactive media projects, among others ARquatic (2019-2021) with Anne Veinberg and Felipe Ignacio Noriega and Vox Populi (2016) and The Station (2016) with Causa Creations. Since 2015, he has also worked as a software developer at the Max Reger Institute in Karlsruhe-Durlach.