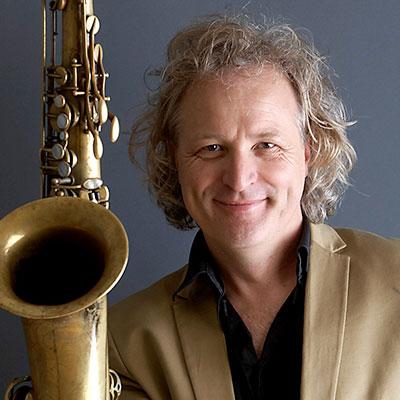 The saxophonist, bass clarinetist, composer and arranger Peter Lehel studied jazz and popular music at the music academies in Stuttgart and Budapest from 1988 to 1996 and passed his concert exam with distinction.

He has positioned himself internationally with very diverse and independent music in the field of tension between jazz and classical music. He is undoubtedly one of the most outstanding composers and arrangers for the saxophone and clarinet family. Numerous arrangements for saxophone quartets and ensembles, free of all stylistic barriers, have been published in the meantime.

He works as a musician and composer with renowned jazz musicians and internationally renowned ensembles such as the Oláh Kálmán Trio Budapest, Ulisses Rocha European Brazil Project, Kristjan Randalu from Estonia, Monika Herzig Acoustic Project (USA), Barbara Dennerlein (Germany) as well as with classical stars such as Sabine Meyer, Wolfgang Meyer, Henning Wiegräbe, Steven Mead and many others.

As an arranger, he has worked for the Cuban world star of Latin jazz, Paquito d'Rivera, and for the "Trio di Clarone" around the clarinettists Sabine and Wolfgang Meyer (Grammy nomination 2010). He has arranged the music of the Hammond organist Barbara Dennerlein for large symphony orchestra.

He is a jazz prizewinner of the state of Baden-Württemberg (1997), twice received the "Preis der deutschen Schallplattenkritik" (2000, 2006), was among the winners of the International Contest for Jazz and Church Organ (Best Group 2001).

In 2004 he received a scholarship from the Kunststiftung Baden-Württemberg, on whose jury he was appointed in 2008.

In 2007 he became visiting professor at the Shenyang Conservatory of Music in China.

Peter Lehel has a very rich discography with very diverse formations and CD productions that cross the boundaries of genres, including Peter Lehel Quartet, Finefones Saxophone Quartet, Pipes and Phones and SaltaCello.

In 2011 he founded the Jazz Ensemble Baden-Württemberg, a formation that works on the development of special programmes in various constellations.

Since 2014 he has been artistic director of the Jazz Juniors of the Baden-Württemberg State Music Council, where he is responsible for the highly talented promotion of jazz.