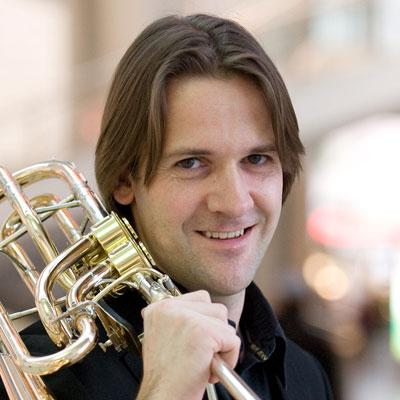 Bass trombonist Brandt Attema is a member of the Netherlands Wind Ensemble, the New Trombone Collective and the Slide Monsters with Joseph Alessi, Marshall Gilkes, and Eijiro Nakagawa. Since 2008, Attema has played in a duo with the harpist Astrid Haring, making numerous appearances around the world. Many compositions have been written for this unique group.

Brandt Attema was a member of the Netherlands Radio Philharmonic from 1999 to 2019. He has been invited to perform with many Dutch and international orchestras, including the Lucerne Festival Orchestra, London Philharmonia Orchestra and Berlin Philharmonic. As a member of the New Trombone Collective, Brandt Attema is involved in the organization of the Slide Factory Festival, a biannual international trombone festival in Rotterdam.

For over a decade, Brandt Attema has taught at music academies in The Hague and Rotterdam. Since October 2019, he has been professor for trombone at the University of Music Karlsruhe. He is regularly invited as guest lecturer and soloist to music festivals worldwide, including the International Trombone Festival, the Eastern Trombone Workshop, the Blekinge International Brass Academy, and a number of International Posaune Vereinigung (IPV) festivals.