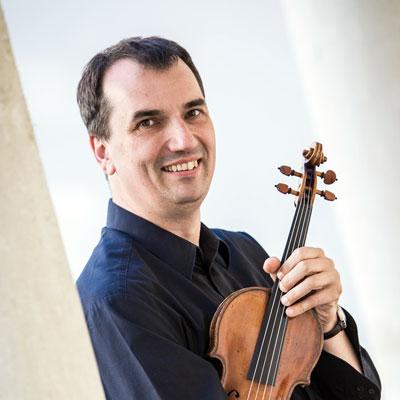 Christian Ostertag is one of the most versatile musicians of his generation. As soloist, concertmaster, chamber musician, and professor of violin, he has earned a reputation that inspires trust and expectations among audiences and students. Critics praise his warm, emotional, and protean sound ("a singer on the instrument") that combines stylistic and technical accurance. The New York Times termed his playing at his debut as "sweet, strong and sure, excellent." Above all, inner focus, temperament, and spark makes concerts by Christian Ostertag laudable experiences. The uncompromising search for profound content in works and a consistent refusal of facile performance and fashions of all kinds have played a large part in his success.

He was born into a German-Hungarian musical family in Karlsruhe in 1963. His grandmother was a violinist, his mother a pianist, and his father the noted cellist Martin Ostertag. Christian Ostertag was surrounded by music from the start and began violin lessons at an early age. After studies with renowned teachers such as Walery Gradow and Rainer Kussmaul and summer courses with such diverse musical personalities as Sándór Végh, Ruggiero Ricci, and Rony Rogoff, his career was propelled when he won first prize at the German Music Competition in Bonn in 1990 and was recorded as part of the 35th national selection of Young Concert Artists.

Many radio and CD recordings document his versatility and violinistic skills. A CD of the First Violin Concerto by Béla Bartók (Hänssler Classics) made the short list of the German Record Critics' Award. Strauss' Ein Heldenleben with the Southwest German Radio Symphony Orchestra of Baden-Baden and Freiburg directed by chief conductor François-Xavier Roth was unanimously praised by critics. Leonard Bernstein's Serenade, also led by François-Xavier Roth, was recorded in live stream format and is available at the Southwest German Radio Media Library.