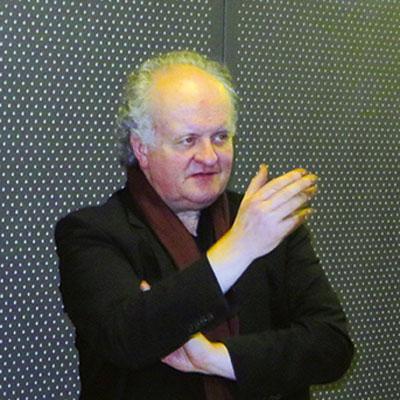 Wolfgang Rihm, born in 1952 in Karlsruhe, produced his first compositions at age eleven. Still at school, he began studying composition with Eugen Werner Velte at the University of Music Karlsruhe while preparing for, and passing, final examinations at the end of his secondary education in 1972. That same year, Rihm moved to the Cologne University of Music to continue composition studies with Karlheinz Stockhausen. In 1973, he began studying composition with Klaus Huber in Freiburg and musicology with Hans Heinrich Eggebrecht. In addition to teachers, composers such as Morton Feldman, Wilhelm Killmayer, Helmut Lachenmann, and Luigi Nono, to whom he dedicated several works, were particularly influential.

Rihm's musical output was honored early on by many awards. In 1978, he received the Kranichstein Music Prize and the Reinhold Schneider Prize of the City of Freiburg, and in 1981 the Beethoven Prize of the City of Bonn. In 1986, he was awarded the Rolf Liebermann Prize for his opera The Hamlet Machine. He has received grants from, among others, the Berlin Art Prize (1978), the City of Hamburg (1979), the Villa Massimo in Rome (1979/80) and the Cité des Arts in Paris (1983). In 1997, he received the Musical Composition Prize from the The Prince Pierre Foundation and in 1998, the Jacob Burckhardt Prize from the Johann Wolfgang von Goethe Foundation. In 1989, Wolfgang Rihm was decorated with the Order of Merit of the Federal Republic of Germany and in 1998, the Free University of Berlin awarded him an honorary doctorate. In 2000, he received the Bach Prize of the City of Hamburg, and in 2001, the Royal Philharmonic Society Award for the work Hunts and Forms (Jagden und Formen). The same year, he was appointed Officer of Arts and Letters by the French Ministry of Foreign Affairs. In 2003, he received the Ernst von Siemens Music Prize; in 2004, the Medal of Merit from the State of Baden-Württemberg; and in 2014, the Grand Cross of Merit with Star and Sash of the Federal Republic of Germany. In 2017, he was awarded the European Church Music Prize, and in 2018, the Foundation Prize of the Ecumenical Foundation for the Bible and Culture. Rihm's extensive teaching began at age 21, when he became lecturer at the Karlsruhe University of Music. In 1978, he was the first lecturer at the Darmstadt Summer Courses. In 1985, Rihm succeeded his teacher Eugen Werner Velte as professor of composition at the Karlsruhe Music Academy. During 1984 and 1985, he was a Fellow of the Institute for Advanced Study in Berlin. Board member of the German Composers Association and the German Music Council, since 1989 he has served as supervisory board member of the Society for Musical Performing and Mechanical Reproduction Rights.  From 1984 to 1989 he coedited Melos music magazine, and from 1985 to 1989 he was musical advisor of the Deutsche Oper Berlin, as well as from 1990 to 1993, of the Center for Art and Media Technology in Karlsruhe. Rihm is a member of the Munich, Berlin and Mannheim academies of the arts as well as trustee of the Heinrich Strobel Foundation Baden-Baden.

As a composer, Rihm investigates almost all instrumental and vocal genres, with a special focus on music theater. Rihm's works include the chamber operas Faust and Yorick (1976) and Jakob Lenz (1977/78). Set to lyrics by Heiner Müller, the opera The Hamlet Machine was created in 1983/86. In 1986/87, Wolfgang Rihm composed Oedipus based on texts by Sophocles, Hölderlin, Nietzsche, and Heiner Müller, and from 1987/91 The Conquest of Mexico based on texts by Antonin Artaud. In 1994, he wrote Séraphin, a wordless music theater piece, which was staged in Stuttgart in 1996. In 1997, he was composer-in-residence at the Lucerne Festival, in 2000 at the Salzburg Festival and the Musica Festival in Strasbourg. On the occasion of his 50th birthday, many festivals and world premieres were held in his honor throughout Europe in 2001/02.

Since 1985, Wolfgang Rihm has been professor of an internationally acclaimed composition class at the Karlsruhe University of Music, to which he has been loyally connected throughout his life. Internationally celebrated graduates include Rebecca Saunders and Jörg Widmann.