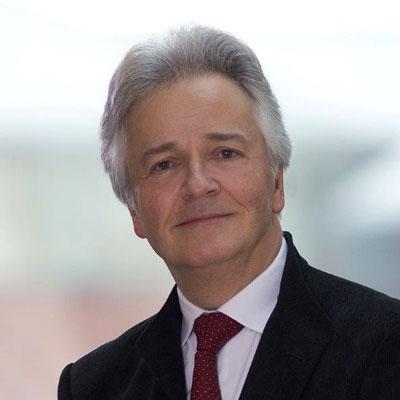 Hartmut Höll's playing is characterized by a sense of sound, sensitivity, and the ability to think "behind" the notes, to create atmosphere, and to let the listener experience sensations directly in the timbres. For decades he has been one of the most sought-after piano partners. He knows the value of chamber music collaboration and is wise enough to cultivate long-term partnerships.

Generously sponsored as a scholarship holder of the "Studienstiftung des deutschen Volkes", Hartmut Höll first studied in Stuttgart with Paul Buck and Konrad Richter, but also received decisive impulses in his private collaboration with Leonard Hokanson. From 1982 to 1992 he was a partner of Dietrich Fischer-Dieskau. Lieder recitals at the Salzburg Festival, the festivals of Edinburgh, Florence, Munich, Berlin and Toyko as well as at New York's Carnegie Hall established the much praised collaboration.

For more than two decades he has accompanied Renée Fleming in concerts in Europe, Australia, Asia and the USA. For him, she is the singer of our globalized world, and with admiration he witnesses how this unique singer knows how to address people of different cultures all over the world with a broad repertoire of works from four centuries and to inspire them for music.

He has been associated with the singer Mitsuko Shirai in a song duo for over four decades. Both have set standards of song interpretation with worldwide concerts and CDs.
"Peter Pears - Benjamin Britten, Pierre Bernac - Francis Poulenc: In our own day, Mitsuko Shirai and Hartmut Höll have achieved a comparable artistry."
The Audiophile Voice, USA.
For Mitsuko Shrai and Hartmut Höll, Lied art has always been chamber music from the very beginning, so in 1973 they created the term Liedduo, which is widely used today.

As a professor at the Karlsruhe University of Music, Hartmut Höll is closely connected to the young generation of artists after earlier professorships in Frankfurt and Cologne. Graduates of his teaching continue the tradition today as professors in Salzburg, Vienna, Paris, Freiburg, Erfurt, Manila, Montevideo and many other places in the world.

In 1998/1999 Hartmut Höll was a visiting professor in Helsinki, from 1994 to 2003 he was a visiting professor at the Mozarteum University in Salzburg; for almost ten years he also taught Lied composition at the Zurich University of the Arts in succession to Irwin Gage. Hartmut Höll was responsible for the Karlsruhe University of Music as Rector from 2007 to 2022. CampusOne –Schloss Gottesaue, one of the most beautiful university sites in Europe, was created under his leadership, and the university today enjoys a great reputation both nationally and internationally.

Hartmut Höll has given master classes for Lied in Finland (annually in Savonlinna), at the International Music Seminar Weimar, at the Schleswig-Holstein Music Festival, at the Summer Academy of the Mozarteum Salzburg, in Jerusalem, Cairo and in the USA. Every year Hartmut Höll teaches at the Shanghai Conservatory of Music, and since 2019 he has been a lecturer in Renée Fleming's SongStudio at Carnegie Hall New York.

From 1985 to 2007 Hartmut Höll was artistic director of the International Hugo-Wolf-Akademie für Gesang - Dichtung - Liedkunst e. V. Stuttgart, which under his leadership did exemplary cultural work: the International Hugo-Wolf-Competition was established in Stuttgart; themes of important concert series were, among others, in 1988 "Eduard Mörike", 1990 "Deutschlande", 1992/93 under the patronage of Simone Veil "Europa im Aufbruch - Menschen - Metropolen - Wanderungen", 1997 the complete performance of the 108 groups of works Schubert himself intended for publishing, 1998 "Naturlaut / Menschenlaut" with an invitation to the European Capital of Culture Weimar, 2002 a musical-literary-filmic "Danube Journey". This work received attention far beyond the country's borders and led to invitations to Lincoln Center New York and the Louvre Paris.

In 2012, "WortMusik" was published by Staccato-Verlag Düsseldorf, a book in which Hartmut Höll describes his experiences, his approach to song, moreover a book full of personal memories.
"It is a courageous and sensitive, a critical but never know-it-all book, a freely rambling yet precise book." OPERNWELT

Together with the president of the Shanghai Conservatory of Music, Hartmut Höll edited Chinese art songs created by Chinese composers since 1920 under European influence but with Chinese idiom and setting poems from a thousand-year tradition. This edition is published by Breitkopf & Härtel.

"(Renée Fleming) was accompanied by the outstanding pianist Hartmut Höll. The way he hit the respective tone of these different compositions and knew how to keep the tension even in the slowest tempo is absolutely adorable. Each of his deeply felt pauses was a revelation; his courage to take artistic risks should be an incentive for all musicians to emulate him."
DER TAGESSPIEGEL after a recital at the Deutsche Oper Berlin

"Above all, she (Renée Fleming) enjoyed the advantage of working with the superb pianist Hartmut Höll - emphatically a partner, not an accompanist."
THE FINANCIAL TIMES after a recital at Carnegie Hall

Hartmut Höll works magic at the piano: With Hartmut Höll, Renée Fleming has chosen a very accomplished accompanist. What the long-time piano partner of Dietrich Fischer-Dieskau conjures up on the piano is simply breathtaking. He effortlessly manages the not always easy balance between sensitive accompaniment and independent interpretation. What colors and shadings he brings out of the piano part, what stories he additionally tells under the vocal part, that can move to tears - for example the end of the song cycle "Frauenliebe und Leben", which is reserved for the piano.
NDR Culture