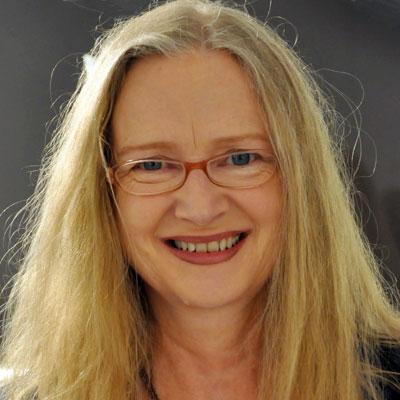 Sabine Schäfer, born in 1957 in Karlsruhe, studied piano at the University of Music Karlsruhe, graduating in 1986 as well as  improvisation and composition with Wolfgang Rihm, passing the composition concert exam in 1992. A German Academic Exchange Service fellowship overseas enabled her to study digital sound generation and surround sound control at computer music centers in the USA and the Netherlands. Since 1991, she has been developing installation art and in 1993 was awarded the International Siemens Media Arts Prize for her art project TopoPhonien. From 1998 to 2013, she created work in the field of surround sound and radiophonic sound art with the composer and media artist Joachim Krebs. Her works are in collections of the ZKM Center for Art and Media Karlsruhe and the Phæno Science Center in Wolfsburg, Germany. She works as a composer and media artist. Her creations are exhibited internationally. Since 2017, she has developed interactive print graphics with audio QR codes.

From 2004 to 2008, Sabine Schäfer was board member of the German Society for Electroacoustic Music (DEGEM). In 2008/2009, she received a working scholarship at the ZKM | Center for Art and Media in Karlsruhe. In 2015 and again in 2019, she was guest lecturer at the Bern University of the Arts, Switzerland. She is a member of the Society of the Association of Women Artists and Art Friends (GEDOK) Karlsruhe in the fields of fine arts, media art, and music; since 2018, she has served as deputy advisory board member for the photography and media art department and since 2019, has been named vice chairperson of GEDOK Karlsruhe.

Since 1989, she has lectured on improvisation in piano lessons at the University of Music Karlsruhe, also offering the subject of introduction to new piano schools with practical exercises. In 2013, she founded PRO KREATIV studio, giving frequent advanced training seminars for piano teachers. Using creative strategies to convey musical and piano methodological content, especially during lessons for beginners, is the central theme of her university teaching and other education seminars. Foundations for an individual approach to promote musicality and instrumental technical skills when dealing with students are demonstrated.