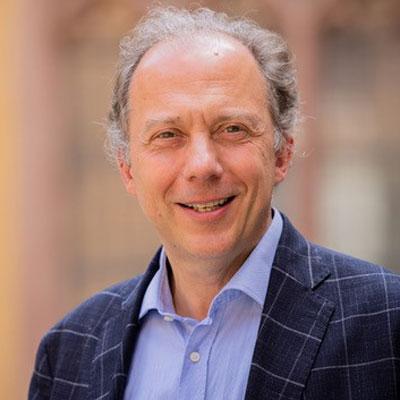 Professor phil. habil. Stephan Mösch completed a double degree in music, theater, and literature in Berlin, as well as singing in Berlin and Stuttgart. He attended masterclasses with Elisabeth Schwarzkopf, Dietrich Fischer-Dieskau, Aribert Reimann, and Helmuth Rilling. He was a scholarship holder of the German Academic Scholarship Foundation and the Richard Wagner Scholarship Foundation Bayreuth. Still a student, he was awarded the Willi Domgraf-Fassbaender Prize and was honored at the German Music Competition. In 2001, he received his doctorate at the Berlin Institute of Technology with a thesis on Boris Blacher (Der gebrauchte Text (The Used Text; Metzler Verlag, 2002). He was awarded his habilitation in 2008 at the University of Bayreuth, leading to a double Venia Legendi (authorization to teach) musicology and theater studies with special emphasis on music theater. His habilitation thesis, Weihe, Werkstatt, Wirklichkeit. Wagners „Parsifal” in Bayreuth 1882-1933 (Consecration, Workshop, Reality: Wagner's "Parsifal" in Bayreuth 1882-1933) was published in its second edition in 2012 by Bärenreiter.

Stephan Mösch was one of the first faculty postgraduates in 2004 to become an Executive Master in Arts Administration at the University of Zurich. In 2010/11 he occupied the Chair of Music Theater Science at the University of Bayreuth. In 2012, he was one of the mentors of the Austrian Science Fund (FWF) project Opera between Hermeneutics and Performativity at the University of Music and Performing Arts Graz. Teaching assignments took him to the Berlin University of the Arts as well as the Universities of Marburg, Lüneburg, and Vienna, and the Dresden College of Music. He taught in the Dresden Music Masterclasses (DMM) and the Weimar Masterclasses. Stephan Mösch was invited to give lectures and presentations at the Bayreuth and Salzburg Festivals as well as many major opera houses, including the Deutsche Oper Berlin, the Frankfurt Opera, the Saxon State Opera, the Stuttgart State Opera and the Vienna State Opera. He conceived and guided conferences at home and overseas.

From 1994 to 2013, Stephan Mösch was editor-in-chief for the journal Opernwelt (Opera World; Berlin), reporting on important world premieres, new productions, and festivals on five continents. In these years he was also coeditor of the OPER yearbook and a CD series. In 2004, Opernwelt was awarded the Gottlob Frick Medal. From 1996 to 2008, Stephan Mösch also wrote for the features section of the Frankfurter Allgemeine Zeitung. He is still active with radio stations of the ARD. Since 2007, he has been repeatedly invited as an expert on television programs, including the first live broadcasts from the Bayreuth Festival in 2011, 2012 and 2015 (Arte, ZDF/3sat, BR).

Stephan Mösch has been a juror at many national and international competitions for singing, directing, and stage design such as the German national competition Bundeswettbewerb Gesang Berlin, the international Paula Salomon-Lindberg Competition "Das Lied,"  the Concours Suisse Ernst Haefliger, the Competizione dell'Opera, the Ring Award, the International Competition for Lied Art of the Hugo Wolf Academy, and the International Hans Gabor Belvedere Singing Competition. Since 1996, he is also a member of the German Record Critics' Award. Since 2011, Stephan Mösch has been a Trustee of the International Hugo Wolf Academy e.V. In 2012, he was appointed to the Board of Trustees of the Richard Wagner Foundation for the redesign of the Richard Wagner Museum in Bayreuth.